‘Pink Floyd: The Story of Wish You Were Here’

It’s a wonder 1975 album Wish You Were Here was released at all. As sound engineer Brian Humphries says in this detail-rich documentary, “There were a lot of days when we didn’t do anything.” After their breakthrough record, The Dark Side of the Moon, it looked like prog-philosophers Pink Floyd would split. But a haunting four-note sequence, and the group’s sadness about drug-addled ex-leader Syd Barrett, gave the work direction.Over seven long months it became not only a moving tribute to Syd, but also an angry skewering of the music biz.

The main players – plus backing singers, cover artists and knob twiddlers – all testify to the carefully thought-out grand design, full of early-synth soundscaping and lyrical intensity.

This is a meticulous rock-doc, the kind that music fans love. Floyd’s driving force Roger Waters and guitarist David Gilmour talk touchingly of their ravaged comrade, whose ghostlike reappearance in the studio towards the end of the recording made them weep. 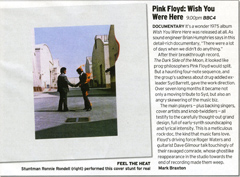