New Mumia Abu-Jamal film questions the evidence against him

A new film on the Mumia Abu-Jamal case, “Justice on Trial”, had its first  screening at a packed venue in Philadelphia in late October.

At the Q and A after the screening, the audience were treated to a surprise phone-in from Mumia himself – on the line from SCI Greene Penitentiary in Western Pennsylvania. The film had its next major screening in New York on Nov 2nd.

With excerpts from our 1996 film, “Mumia Abu-Jamal: A Case for Reasonable Doubt”, the new film brings up new evidence demonstrating the flawed nature of the prosecution’s case against Mumia. 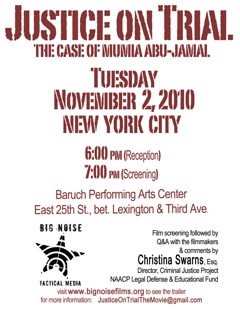