IN-DEPTH: RAVE Magazine interview – the making of ‘PINK FLOYD: THE STORY OF WISH YOU WERE HERE’

Hi John – where are you right now?

Hi Denis. I’m in New York, where I’m semi-permanently based.

How does one shoot a Pink Floyd documentary?

The simple answer to that question is you shoot it with a great Director of Photography who intuitively knows how to respond to each situation. For instance, the Waters and Gilmour music sessions were all shot handheld with one camera – which gives it a more dynamic feel than if we had just used a static camera fixed on a tripod. It’s more risky because you don’t usually get a second take but Graham Day, my DOP, has the “eye” and the confidence to do that. He’s brilliant.

If you mean,’how do you set about shooting a PF doc?’, the answer is that it takes a lot of pre-planning, patience and negotiation…which takes us to your next question…

How long did ‘The Story Of Wish You Were Here’ take to film and edit?

Discussions with the artists, through their respective management companies, started in March 2011. The film was completed at the end of December 2011. I actually came on board in July. This was unusual for me as I usually produce and direct films that I have originated. But in this case I was asked to direct the film by producers at Eagle Rock, the music docs company in London, after they had secured the agreement of Pink Floyd.

Do you have a favourite scene/sequence in the film?

I love Roger’s stripped-down intense performance of the song ‘Wish You Were Here’. That was was my high point of the filming. But there were a lot of other moments to savour. Fascinating stuff in Abbey Road going back to the original tapes with Brian Humphries, the sound engineer, who hadn’t set foot in the building for over 30 years. Traveling to Missouri to film Ronnie Rondell, the stuntman, who turned out to be such a terrific character – roaring down the back roads on his motorbike, in his seventies, with us filming off the back of a rental truck was another high point.

Was it difficult to track down every person who eventually got featured in the film?

It took some digging. I was especially helped by our resourceful researcher Adrian Winter. Finding Ronnie the stuntman was one of his feats. Discovering Vanetta Fiields in Australia was also down to Adrian’s sleuthing. She was the gospel singer who sang backing vocals on ‘Shine On’. Both Ronnie and Vanetta just add those “can you believe this !” moments to the film. I think they are examples of taking the film beyond the standard “Classic Albums” formula, which I certainly wanted to steer away from.

When did you first establish contact with PF members?

I had already met David Gilmour, Roger Waters, Nick Mason and Rick Wright back in 2001 when I as making my documentary ‘The Pink Floyd and Syd Barrett Story’ ( also available on DVD…check it out!). But this time around, the contact was made via their respective managements back in March/April before I came on board the project.

What’s it like being on David Gilmour’s houseboat ‘Astoria’?

I loved it. There’s something quite eccentric about it. It’s a creaky old vessel that was originally built in 1911 by an impresario who had the idea of a houseboat that had enough deck space for a 90-piece orchestra to play on it! David bought it in the mid 80s and turned it into a recording studio. Everything’s quite small-scale. It’s private, yet you see the river traffic of pleasure boats and swans just gliding passed outside. The day we filmed it was belting down with rain which added to the atmosphere.

Extremely engaging. He’s a very passionate guy. Involved with social and political issues and loves to talk about them. For instance, ‘Occupy Wall Street’ was in full swing and he talked intensely about supporting it. I had made a documentary some time ago for HBO about a guy on death row, Mumia Abu-Jamal. Roger was interested in the case, so after the interview, I sent him a DVD. He rang me and told me how much he appreciated the film. For a guy who is planning a world tour with The Wall, I thought that was pretty great of him to find the time to make the call.

Do you have any favourite memories of the sadly departed Syd Barrett and Rick Wright?

I never met Syd. When I was making my documentary ‘The Pink Floyd and Syd Barrett Story’, I met several times with his sister Rosemary and we agreed that it would not be right for me to try and approach him. She told me he had no interest in his former life and he found it painful when the subject came up. I was extremely impressed by the care and loving commitment of his family to him…he had walked back to Cambridge from London (over 50 miles) in the mid-70s and lived there amongst them ever since.

I met Rick when I filmed an interview with him in 2001. Very polite. Low key. Totally without self-importance. No minders or gate-keepers. I had his home phone number and he answered it himself. He talked very honestly I thought about his difficulties with Roger in particular. I think Roger was and is such a force of energy that Rick found it hard to have any say in the way the band operated. In fact he was the only one who was classically trained and his keyboard playing added such a powerful layer to tracks like ‘Shine On You Crazy Diamond’. There’s a good argument that Rick was the ‘George Harrison of Pink Floyd’.

You’ve also directed a documentary on Robyn Hitchcock. What was that experience like?

A fantastic experience with Robyn! My association with him began during the Syd Barrett filming. He sat in his garden playing Syd’s songs. Such an instantly compelling guy. A few years later we had lunch and Robyn mentioned that he was about to do a week’s playing and recording in his kitchen with house guests from REM, including guitarist Peter Buck. I persuaded the BBC and the Sundance Channel in the US to fund me to shoot the week…and then a tour of the US. The film is great fun to watch I’m told – and not surprisingly there’s very good music in there too! It’s called ‘Robyn Hitchcock: Sex, Food, Death…and Insects’.

By the way, there’s also a concert doc which I made subsequently with Robyn: ‘Robyn Hitchcock: I Often Dream of Trains – A Concert Film’.

What is your favourite Floyd album?

It has to be ‘Wish You Were Here’. With ‘Piper at the Gates of Dawn’ (with Syd) a close second.

Do you have any future plans regarding film-making at this stage?

Far too many – and not enough money to carry them through! Getting music docs off the ground is harder to do these days because the artists themselves often want to choose the director,etc..and everyone wants Martin Scorsese !

I’m thinking of dipping my toe into crowd-funding as a way of developing my next doc – a film about a guy on death row who is almost certainly innocent.

Cheers Denis .. you’ve just got up. For me it’s time for a beer! 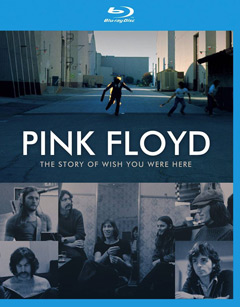